Both international and domestic businesses are often affected by the dynamic economic conditions prevalent in the market. Factors like demand and supply, interest rates, recession, inflation, etc. often have an impact on the businesses. 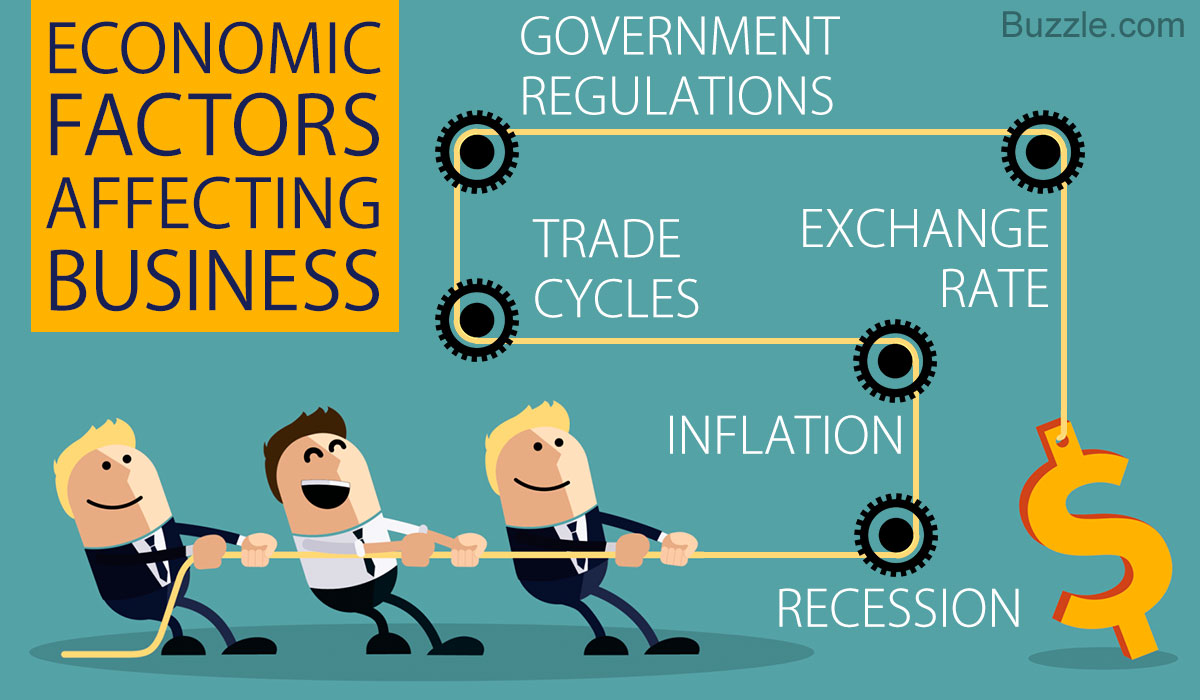 Both international and domestic businesses are often affected by the dynamic economic conditions prevalent in the market. Factors like demand and supply, interest rates, recession, inflation, etc. often have an impact on the businesses.

Every business has one goal, to maximize its profit. This can be done by analyzing the demand of consumers, providing appropriate supply, along with maintaining quality of goods and services. However, there are many factors that affect this simple operation. Owing to these economic elements, the sales, production, and procurement of a business get adversely impacted.

The demand and supply are two principal factors that affect the working of any business model. The demand is the will and ability of consumers to purchase a particular commodity, while supply is the ability of the business to provide for the demand of consumers. Suppose, a mobile phone infused with latest technology is introduced in the market, it will have a higher price because of its demand in the market. Its prices will continue to increase if the supply does not meet the demand.

For instance, in the year 2000, weather played havoc with the sugar crops of Brazil, which is the largest sugar producer in the world. This led to a decrease in the supply of sugar, which in turn resulted in a steep rise in the sugar prices. However, after the initial price rise, the market forces came into play and the demand for sugar became equal to the supplied sugar.

Utility is the amount of satisfaction, that is derived by consumers from the consumption of goods. It so happens that after continuous and successive consumption of units of the same goods, the satisfaction that is experienced by a consumer starts decreasing. This often results in short-term or long-term fall in sales. Some organizations prepare for the launch of another brand, before the fall in utility and sales is experienced. The launch of new brand ensures that the revenue trend of the business does not fall. Diminishing utility is among the external factors affecting business.

Banking facilitates monetary and fiscal policies that affect business and also the customers of the business. Money in circulation dictates the purchasing power or rather the demand of the consumers. On the other hand, the banking facility dictates the borrowing capacity of individuals as well as the business. The banking policies play a decisive role in affecting the prices of goods and interest rates along with investment and asset prices. The monetary polices of countries also influence the economic activities and inflation. This whole dynamic process is also known as monetary policy transmission mechanism.

Economic growth dictates the amount of finances that the society at large is earning and development indicates the volume of money that is being invested into channels of long-term upgradation. Among all the economic factors, development is the most important one, as a business has to cater to the demands of an economically dynamic society. For example, the luxury brands perform well during an economic upturn, much more than the companies which produce essential offerings.

A trade cycle plays a part in fluctuating the costs of goods and commodities in an economy. Prosperity, recession, depression, and recovery are the phases of a business cycle that affect the demand and supply of all goods. Also, trade cycles often affect the general price levels of essential and non-essential commodities.

Inflation is a phenomenon that occurs when there is too much supply of money in the economy that is not supported by the output of goods and services. As there is a lot of money floating around, the prices of goods also increase in order to sustain the businesses, resulting in the increase of costs of raw materials which are needed for production. A hike in the prices of raw materials, thus, also increases the cost of a product.

In simple words, the buying capacity of people decreases, when their incomes remain constant but the prices of products and services increase. This affects the demand for the goods. For example, in 2008, Zimbabwe faced the worst case of inflation, which proved disastrous for its economy and led to the abandonment of its currency.

During recession, companies face a decrease in sales revenues and profits. To curtail cost, they resort to cutting back on hiring new employees, making capital expenditure, marketing and advertising expenditures, research and development activities, etc. This not only affects large organizations, but also the small ones which act as vendors to these big companies.

Smaller organizations may find it difficult to survive in recession due to lack of financial funds or availability of loans. Also, people may shift their preferences to slightly affordable products during recession or may not spend on luxury items at all. This will also have a negative impact on the demand for these products. Factors like falling stocks, lack of dividends, below par quality, employee lay-offs, bankruptcy, etc. during recession may also affect the business adversely. For example, in 2007, when the banking industry was unable to face the meltdown of the mortgage market, it inadvertently led to a free fall of the stock market and a decrease in consumer spending. It also set into motion a chain of events that resulted into a global recession within a year.

When a company buys certain goods from a US-based organization, it will have to convert its currency into US dollars for making the payment. If the currency of the buyer is stronger than the US dollar, it will be beneficial for the company. However, if it is weak, the company will have to shell out more money. This was an example of an export business. A similar logic will also be applicable to the import business. Moreover, price competition in the international market often leads to fluctuating prices. This is because a foreign company in the US market may increase or decrease its prices depending on the changes in the exchange rate.

Suppose some time ago, 1 pound was 1.5 US$. However, today, it may decrease to 1.3 US$ if the value of dollar appreciates. This will cause the imported goods from UK to become cheaper for the consumers in the US. However, this will not be a good news for US exporters as UK consumers will find that they are getting lesser returns for a pound’s worth.

The rate of interest has a direct impact on the loans that business take to sustain or propel their growth. The higher the interest rates, businesses find it difficult to commit to projects that require investment. On the contrary, lower rates make it easier for people to borrow money in order to buy cars and houses. Low loan rates also provide an opportunity to people to spend more on other things, thus creating a demand for various goods and services, and thereby spurring the growth of economy.

There are several government agencies that regulate businesses for the safety of humans, animals, and environment. Some industries are heavily regulated and introduction of new laws discourage uncontrolled growth of factories and plants. For example, a coal-powered power plant may be asked to be shut down because of an environmental threat it poses. This may affect a business drastically.

Every changing factors in an economy affect the working of businesses. Hence, companies need to have a foolproof strategy and contingency revenue reserves to cope with such dynamic changes. It is best to take calculated risks and expand a business when the rates of interest are low and the demand is high.