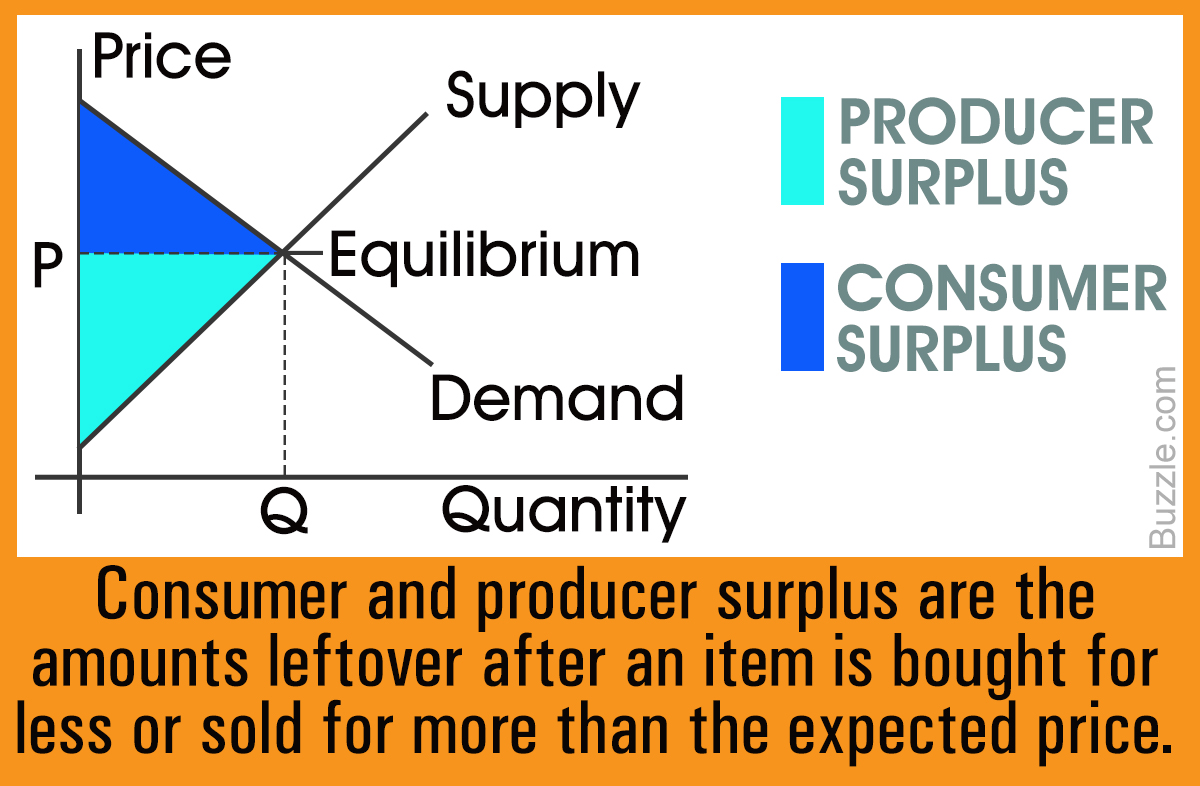 The terms consumer surplus and producer surplus refer solely to the entities on the supply and demand graph. Do not confuse the term surplus with its other meanings in Heterodox economics or Marxian economics.

Economic surplus is a vital concept in the discipline of economics. Also known as total welfare surplus, it was introduced by the noted economist, Mr. Paul A. Baran. Consumer surplus and producer surplus are two very important entities under economic surplus. Both of them can be graphically represented by means of the regular demand and supply curve. To understand these entities, remember that the demand curve represents the quantity of products that the consumers can purchase at a probable price, while the supply curve represents the quantity of goods that the producers can make at a probable price. The consumer surplus vs. producer surplus comparison is elaborated in the paragraphs below.

A simple example of consumer surplus would be when you purchase an item for which you intend to pay USD 100, but ended up paying only USD 70. In this case, you have a consumer surplus of USD 30.

A simple example of producer surplus would be when you sell an item for which you intend to charge USD 200, but the consumer has paid USD 250. In this case, you have a producer surplus of USD 50.

The consumer surplus formula can be expressed as an area of a triangle. In simple terms, you can just subtract the amount paid from the expected amount value. In more complicated problems, however, you need to gather the value from the demand curve. Consider the market price (equilibrium price) and the maximum price at which the purchased product falls to zero. Subtract the latter from the former. According to the graph, this is the height of the triangle. Consider the maximum quantity as the base. Use the formula [(1/2) * Q * P] and find out the consumer surplus.

According to the graph, the producer surplus is also represented by means of a triangle. You have to use the same formula here as well. First, find out the amount actually received by the producers due to consumer demand. Then, find the maximum price at which the sale of the product falls to zero. Find the resultant price, which is the height of the triangle. The maximum quantity of the goods sold at the unexpected price will be the base. Use the same formula – [(1/2) * Q * P] and find out the producer surplus.

The consumer and producer surplus formula depends a great deal on the demand of the consumer and the amount the producer is willing to supply. That is why gathering a demand equation from the graph is important. Accordingly, your parameters will vary and so will the final value.